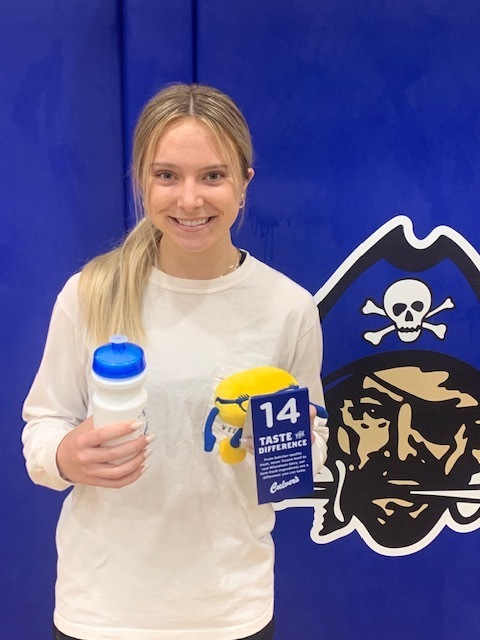 Pirate Competitor of the Week 8-29

Pirate Competitor of the Week

Julia Townsend is the first Pirate Competitor of the Week for this school year sponsored by Galena Culver’s and the Galena Gazette  Julia has helped lead the Girls Varsity Volleyball team this past week with an opening win against Fulton and a championship in the Galena 12 team Invite this past Saturday. Coach Wills stated “Our season has gotten off to a great start and a big reason for that was the play of our senior setter, Julia Townsend. Our passing has been a little shaky to start the year but that or the adverse condition of heat in the gym seemed to have any affect on Julia as she repeatedly set the ball in some great locations for our hitters. She is the quarterback in our offense and performed at a very high level this past week. For the 6 matches she put up some great numbers: 129 assist, 18 digs, 3 aces and 7 blocks. Great job Jules!” Julia was honored with a gift basket from the Galena Culver's, as well as a newspaper courtesy of the Galena Gazette.

Sam led the Pirates with 9 tackles and had two big touchdowns in a tough loss to Fulton 31-12. Sam recovered a fumble and ran for a 71 yard touchdown and then had a 95 yard kickoff return for another score. Coach Freed stated, “Sam made a couple of big plays for us and was able to get a couple scores on the board. His kickoff return was an amazing effort as he broke many tackles and then used his speed to race to the goal line. Sam has worked extremely hard to prepare for this season and has been a great leader for us”

Emma Ehrler played a huge part in both of home game wins over East Dubuque and Pearl City by serving 39 aces between the two games. Coach Rigopoulos stated, “She is a leader on the court and works hard in her position as a setter.”

Myla Norman collected 4 aces and 5 kills over our wins with East Dubuque and Pearl City.

Coach Rigopoulos said, “Myla Norman has shown vast improvements in the last few weeks with her consistency on the court.”